Nuclear magnetic resonance is an ubiquitous analytical technique. It’s used for medical diagnostic, drug delivery, safety, food analysis, material science, chemistry and much more. Yet, the development of nanobiology, nanotechnology and molecular chemistry demands new tools allowing to perform analysis on extremely small volumes of just a few cubic nanometers. For the first time, a group of researchers propose a solution, and it’s based on diamond. 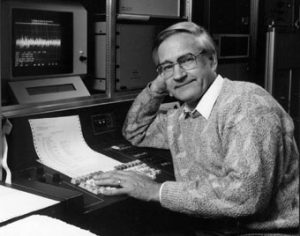 Richard Ernst won the Nobel Prize in 1991 for his contributions to the development of NMR spectroscopy.

The discovery of nuclear magnetic resonance (NMR) dates back to the 1940’s when I. Rabi, F. Bloch and E.M Purcell observe that nuclei absorb energy at frequencies specific to their isotopic nature. The concept is quickly applied to fundamental studies of matter. Between 1960 and 1980, the measurement techniques are refined: NMR starts spreading out of the labs. The impact of this technique on our society is probably best illustrated with the example of the MRI scanner, an instrument based on the the principles of NMR, now routinely used in hospitals, which largely contributed to the improvement of medical diagnostic over the last decades.

However, despite 30 years of development and innovation the spatial resolution of conventional devices is still limited to volumes on the micrometer scale. In addition, classical noise associated with the electronics of the pick-up coils ultimately limits their detection sensitivity. For these reasons, conventional tools are not compatible with sensing on the nanoscale. Yet, this is where proteins, molecules and DNA are.

DOING JUST AS GOOD WITH A SINGLE ELECTRON

Nanoscale NMR represents a real challenge. The ultimate goal is to detect the signal produced by a single nucleus, when conventional technique need 10 000 billion such nuclei to get out of the noise! In order to do so, the best way is to get close. This was the approach followed by N. Aslam et al in a recent experiment whose results were published in Science. In their work, the researches use a single electron trapped at the very surface of ultra pure diamond to reach a sensitivity just as good as in conventional NMR devices. But by doing so, the sensing volume is also reduced to a tiny ball that can be as small a couple of nanometers in radius.

But chemistry applications require one last ingredient that is spectral resolution. In order to distinguish between different compounds that sometimes only differ by some structural re-arrangement, a high finesse is necessary, on the order of 1 part per million (1 ppm). So far, such a resolution was out of reach, because of the limited electron spin coherence.

ENTANGLEMENT TO THE RESCUE

In their work, N. Aslam et al overcome this limitation by using an entanglement protocole with a nuclear spin from the diamond matrix. By doing so, the team obtains a boost in resolution of 6 orders of magnitude and demonstrate liquid-state NMR on a nanoscale sample. For now the measurement technique remains slow, high magnetic fields (3T) and high speed electronics (100GHz) were used, but the prospects are encouraging, and the proposed method addresses an important challenge for both fundamental research and industrial applications.

NMR on diamond gets down to chemistry

PrevNext
We are using cookies and analytics tools to give you the best digital experience.
AcceptPrivacy Settings